Tanya's huge mural, "Can You See It From The Moon,"
has a starring role in her video
An Artist's Romance With San Francisco,
now on youtube.

· Allen House, my first mural
· In the Kitchen, a mural at Hunters Point Shipyard
· Amateur Artists Day, in the lands east of San Francisco
· Through the Tunnel to Honey Hill, a residential mural
· Mural Painting at Cowden Automotive, in a business setting
· Can You See It From the Moon
· Getting the Word Out
· Ongoing and Upcoming

My third mural was documented in both video and still photography. The brainchild of Paul Israel's Pi Productions, this mural was, like my first one, a group effort. But instead of four people, there were a dozen of us. 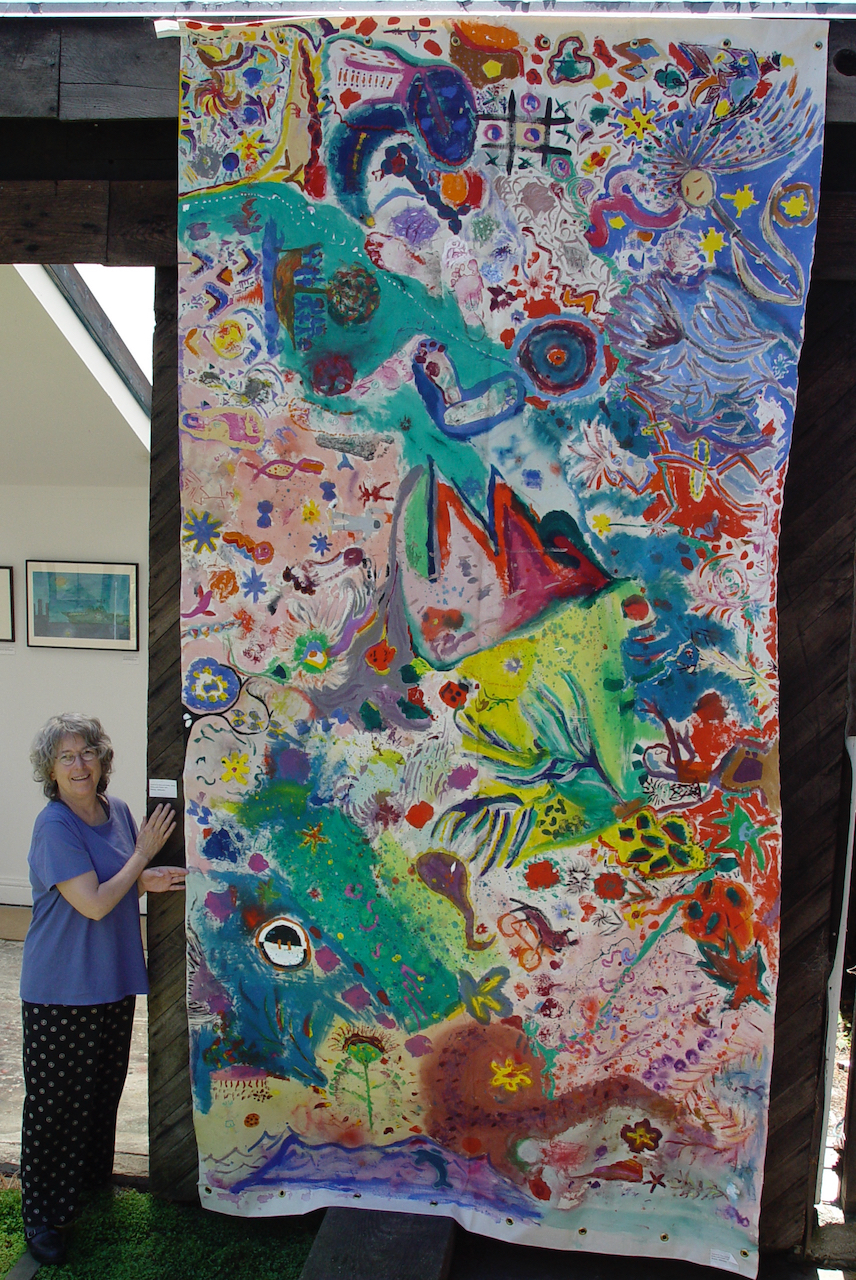 Paul created an event, Amateur Artists Day. The idea was to give amateur artists a chance to have fun with a pro or two to provide help when needed as pros and amateurs worked side by side. We painted in acrylic on canvas approximately 5 feet by 15 feet. A camcorder rolled at normal speed throughout the three or four hour painting session. The mural was painted at Bob Arnold's house in Emeryville, California. Referring to the location, Paul named the piece Bob's Back Yard. A barbecue followed cleaning up the brushes. I exhibited the mural twice during San Francisco Open Studios at Hunters Point Shipyard, but we have never found a venue for showing the video and exhibiting the mural together.

The point of this mural is simply having fun. Space in the composition was not squared off in any way. People just started painting somewhere. I encouraged everyone to move around the canvas by painting stars and swirls here and there without saying anything about it. People added to one another's designs in a peaceful, cohesive afternoon. I think it did not occur to any of us that there was even the possibility of stepping on someone else's toes, though one participant painted her feet and walked around on the mural to the amusement of everyone. Without looking at the video, I can not say for sure what I painted on this mural. I became part of the overall painting to my own pleasure, though not on a conscious level at the time. I was simply having fun, too.

Some months after Amateur Artists Day, I was at an exhibit where professional artists displayed a jointly done mural. Space had been allocated to each individual and no one's customary style had been modified by the joint venture. There was also no laughter at the opening. This was serious art, each artist painting "my" part of the mural with little sense of combined effect. I am generally interested in shared efforts, but I could not get emotionally involved with this painting. Exactly why is hard to say, but I found the piece lacking in excitement.

When I proposed exhibiting Bob's Back Yard as part of a San Francisco public mural art program, I was told that my mural did not have a "purpose." It was not aimed at a particular age group, a specific cultural heritage, or a definite kind of therapy. I tried to persuade the decision makers that doing art in adult life is generally its own joy and a valuable breakthrough. No dice. I discussed the confidence resulting from commaraderie in events such as Amateur Artists Day: men and women, people who previously knew each other and people who did not, some with art experience, others with none – all cooperating! Still no dice. I didn't have a mission statement. I had no rationale. In the opinion of the project staff, Bob's Back Yard did not relate to any of the community mural program's significant ideas. 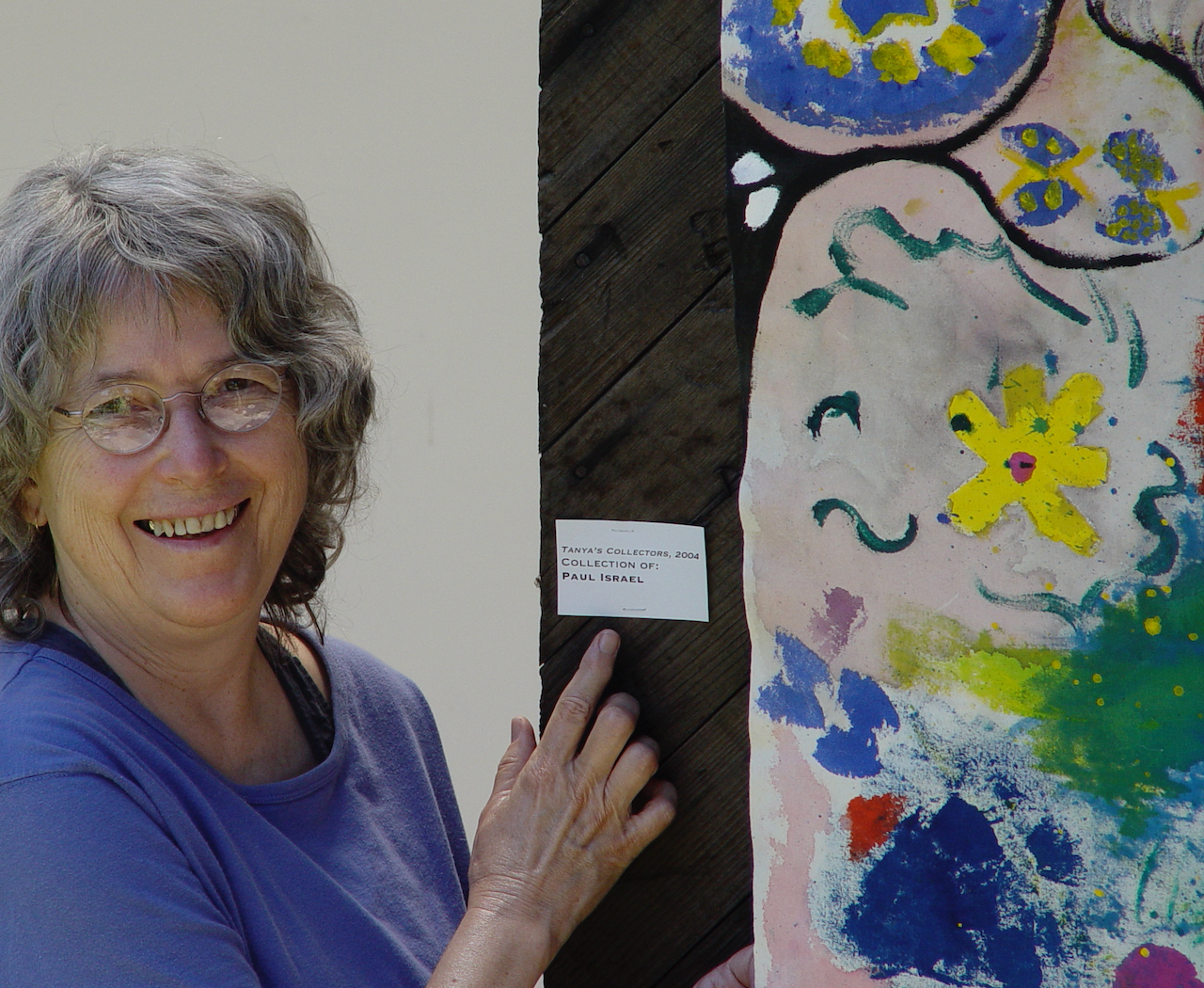 Later I spent hours looking at Bob's Back Yard when it was exhibited at my studio. The mural doesn't have a top or bottom. Choose your own orientation. Inspired by its shapes, I have painted a series of trees, a sequence of butterflies, and a creatrix of the universe.

A Chinese American visitor to my open studios said that I had, with this mural, successfully bridged the gap between individual self-expression and concerted group effort that is a desired, and difficult to achieve, goal of twentieth century art philosophy in his homeland. I was thrilled to discuss this point with him. His observation spoke to my concerns with "room for all" at the table of art and his concerns with philosophy, also carrying both of us into a cross-cultural connection with which we did not have previous direct experience.